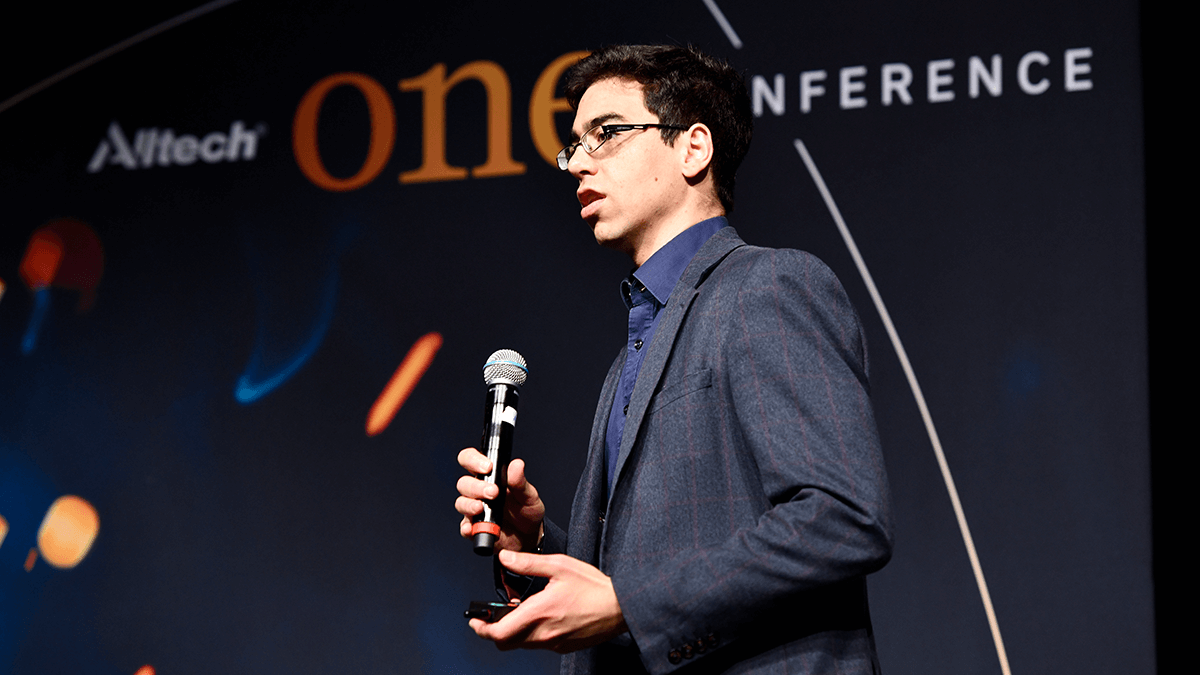 Beta Bugs Ltd. is an insect genetics company developing and distributing black soldier fly breeds to the insect farming sector. Dr. Thomas Farrugia, CEO of Beta Bugs Ltd., joins the Ag Future podcast to discuss how this ag-tech startup is using genetics to increase the size and survivability of black soldier flies in order to meet the growing demand for insect protein in aqua, pig and poultry feed.

The following is an edited transcript of the Ag Future podcast episode with Dr. Thomas Farrugia hosted by Tom Martin. Click below to hear the full audio or listen to the episode on Apple Podcasts, Spotify or Google Podcasts.

Tom:            Welcome to Ag Future, presented by Alltech. Join us from the 2022 Alltech ONE Conference as we explore opportunities within agri-food, business and beyond.

Dr. Thomas Farrugia is the CEO of Beta Bugs Limited, based in Edinburgh, Scotland. He founded Beta Bugs after identifying an opportunity for improved genetics in the rapidly developing insect farming industry. I’m Tom Martin. I’d like to welcome you, Dr. Farrugia, to this episode of the Alltech Ag Future podcast series.

Tom:            I have so many questions for you. First, where do you find yourself in this tension between the human aversion to insects versus the potential of insect protein production in the food chain?

Thomas:       With humans, there’s going to be a “yuck” factor. I think that’s perfectly okay. We will see insect protein in human food. I think you just might not be eating crickets straight off a plate. It will be ground down, milled and included in as a protein ingredient in your foods. But what we also see is — and that’s what we’d call the “insects as food” industry, or you also see (it) as the “insects as feed” industry, which, I say, makes the larger component of the insect farming sector. That’s where the insects still get milled and ground down, but they get used as a protein source in pig, fish and chicken feed. When you think about this, it’s quite natural for fish to eat bugs. When you look at the trouts, they’ll go and eat bugs. Similarly with chickens, (which are) are grubbing around on-farm. That’s a very good place to be putting insect protein.

Thomas:       In terms of nutritional, you’ve got a very high protein content. It’s comparable — depending on how you process it and what you grow the bugs on, it can be comparable to soy and fish meal, sometimes outstripping (them) in terms of performance there. You’re looking at around a 40% dry protein content in the bugs once you’ve ground them down. You also have the fat, which has some benefits as well.

Thomas:       It’s very sustainable in terms of when you think about how the bugs are being grown and the process of production. What you’ve got is — the main insects, for example, is black soldier fly. There are also mealworms for the insects in the feed industry. They can be grown on, say, food, or you could call it food waste. It’s also agricultural co-products. That means you’ve got something which might not have had a use, which might have had to go to landfill and would generate carbon dioxide, and you’re just using that up. There are no emissions there. The other bit about this, which makes it really sustainable, is no transport. You can basically produce locally. That means you’re reinforcing your agri-food supply chain.

Thomas:       Insects as feed is characterized primarily by black soldier fly and the black soldier fly larvae. The larvae are basically really big grubs which eat anything. Then you’ve got mealworms, which become beetles. The mealworm, again, is the stage which eats a range of things and then gets ground down into the protein. When you look at food, it’s a bit broader. I tell you, mealworms, there’s crickets, and then there’s a whole bunch which are still on the, I’d say, scaling-up journey or being developed. I’d say black soldier fly would probably also cross over into human food in a given time.

Thomas:       Yeah. It’s the main component of the insects feed industry. I think the reason for that is it’s a bit more versatile in terms of what (it) can be grown on. It’s formed internationally. You can go to — I mean, we’re from the U.K. It’s being farmed there. It’s being farmed in Europe. You’ve got South America, same; Africa; Asia. The difference is it’s grown on different things. In some cases, in Asia, it’s grown on tofu waste. In Europe, it’s being grown on brewers’ grains. It just adapts really well and (still) performs.

Tom:            On a scale of one to five, with five representing a world that widely relies on insect protein for sustenance, where do you place the insect farming industry right now?

Thomas:       If I could go (to) decimal points, I think I’d err towards three and a half to four. The reason is insect farming is happening. It’s no longer something where people just talk about it. It’s happening. It’s happening at scale. We just need more scale for it to really become a player in the agri-food industry. When I say “scale,” it means thousands, if not — well, it needs to be hundreds of thousands of tons a year of insect protein. That’s the scale where agri-food will use it.

Thomas:       We’re the developer and distributor of black soldier fly breeds. We’re a genetics company. That means we’re further upstream in the supply chain. What we’re all about is making a better insect. We make a better black soldier fly, which grows bigger, faster, lays more eggs, (has) better survivability. That means the farmer can do more with the bugs. Basically, it’s upstream. It’s classical genetics play, when you look at it. Every other industry has a genetics company — at least one; usually two. They all create a massive impact in their supply chain.

Thomas:       Effectively, what we’re saying, our clients who are wanting to diversify — and this is really interesting, actually, Tom. You’ve got the insect farms already, which is great. You know, these are the guys who’ve been trailblazing and setting up the scale. But now we’re seeing other players in the agri-food industry looking at this and saying, “I can get in and I can be part of this.” What we’re seeing is customers who are taking those steps into becoming commercial producers of black soldier fly.

Tom:            What has to happen in the marketplace if the insect industry is to reach its full potential?

Thomas:       What we need to see there is scale. We need to see larger amounts being produced. We need to see, I’d say, professionalizing in terms of being able to work to standards for the feed industry. Apart from scaling, it needs to be consistent outputs. We can’t just have a flux. This is one of the things in our industry, as the operators or waste processor, where you receive everything in and you try and make a consistent product, or do you co-locate next to a really big substrate stream and just use that and have a very consistent product? That’s one of the tensions, I’d say, as to what you do. Consistency, scale, and I’m a bit biased about genetics, because genetics is what allows you to get even further.

Tom:            Let’s talk about genetics. How are genetics improving? What difference comes as a result of progress?

Thomas:       What we do at Beta Bugs is run a breeding program for black soldier fly. We’re selecting the top performers for things like larval mass, how big do they get, how fast do they grow, development time, survivability, and then, also, just how many eggs do they lay. What that means is a producer will be able to produce more protein per unit time out of a facility. We’ve been running that for a period of time now. We are seeing gains. The really interesting bit about black soldier fly is it’s a short life cycle. You can squeeze a lot of gain in a short amount of time. I mean, plant breeders must be envious, because they do what, a crop cycle a year? We’re doing in the range of eight to ten.

Thomas:       (Our relationship with the) Roslin Institute goes back a bit now. I moved the company up back to Scotland because the Roslin Institute is basically a world leader in animal genetics. They were the guys behind Dolly the sheep. We just had to be on that campus to be able to work with them. What we did was we set up a relationship and developed a collaboration where we worked up the breeding program work collaboratively. We basically brought them along with us on the journey into a new frontier for them, which is insect protein. We’ve been able to progress our relationship even further through a number of mechanisms. Basically, it’s just been able — allowed us to build up that breeding program further and really leverage the expertise (on their team).

Tom:            Well, this has really been fascinating, Thomas. We look forward to following your progress. Just one question. If I eat bug protein, if I involve that in my diet, what am I? I’m not a vegetarian. I’m not a carnivore. What am I?

Thomas:       Yeah. I think — well, that was “ento”. “Ento” is bugs. But I — classically, I’d frame it into, still, this would be a carnivore approach. But bugs are eaten already. I think it is something that we do eat. There are no issues there, per se. It will be an alternative source of protein. I really like to think — maybe just something to close off with — when you watch “Blade Runner 2049,” and the opening scene is just an insect farm, and it just is, it’s part of the day-to-day. In the same way we have a crop of barley, a chicken farm or a pig farm, whatever, there’s just going to be an insect farm. I think that’s where we’re going to be.

Tom:            You know, it’s kind of funny, isn’t it, that we think nothing of shrimp or lobsters, and that’s basically what we’re considering.

Thomas:       Yeah. It’s crustaceans, arthropods. They’re all very similar. One thing we should keep in mind as well, you know, (is) sushi. There was a period where sushi — people were like, “Whoa, what’s sushi?” Now, it’s just something you just pick up. You can pick it up from the supermarket. And I think bugs is going to be the same way. That kind of comes full-circle there, Tom, where that’s how I got in, because I’d see shrimps in the shop. I think shrimp, in the U.K., (is) ten pounds, twelve pounds a kilo. I look at the bugs, and the bugs will be going for 40, 50 pounds a kilo. We can’t have that. We need to have it cheaper to be able to access it in the same way we access shrimp. Again, genetics enables you to bring the price down.

Tom:            I’m Tom Martin for the Alltech Ag Future podcast series. Thank you for joining us. Be sure to subscribe to Ag Future wherever you listen to podcasts. 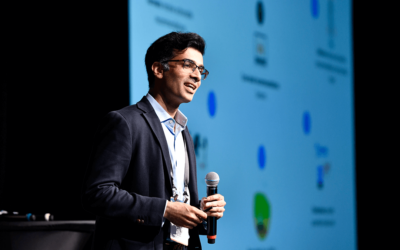 Yasir Khokhar, CEO and founder of Connecterra, joins the Ag Future podcast to discuss the importance of turning data into actionable insights and how programs like the Pearse Lyons Cultivator are helping ag-tech startups navigate the global food supply chain through commercial pilot projects.

Since the launch of the Pearse Lyons Cultivator, 23 young companies have participated and benefited from the guidance.... 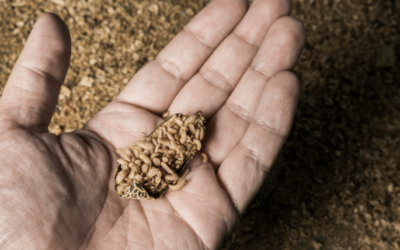 Protix is a Dutch nutrition company working to improve future food-production systems by using insect-based foods. Founder and CEO Kees Aarts joins us to discuss what inspired him to pursue creating alternative feed for animals and his vision for a future with less food waste thanks to insect-based ingredients.